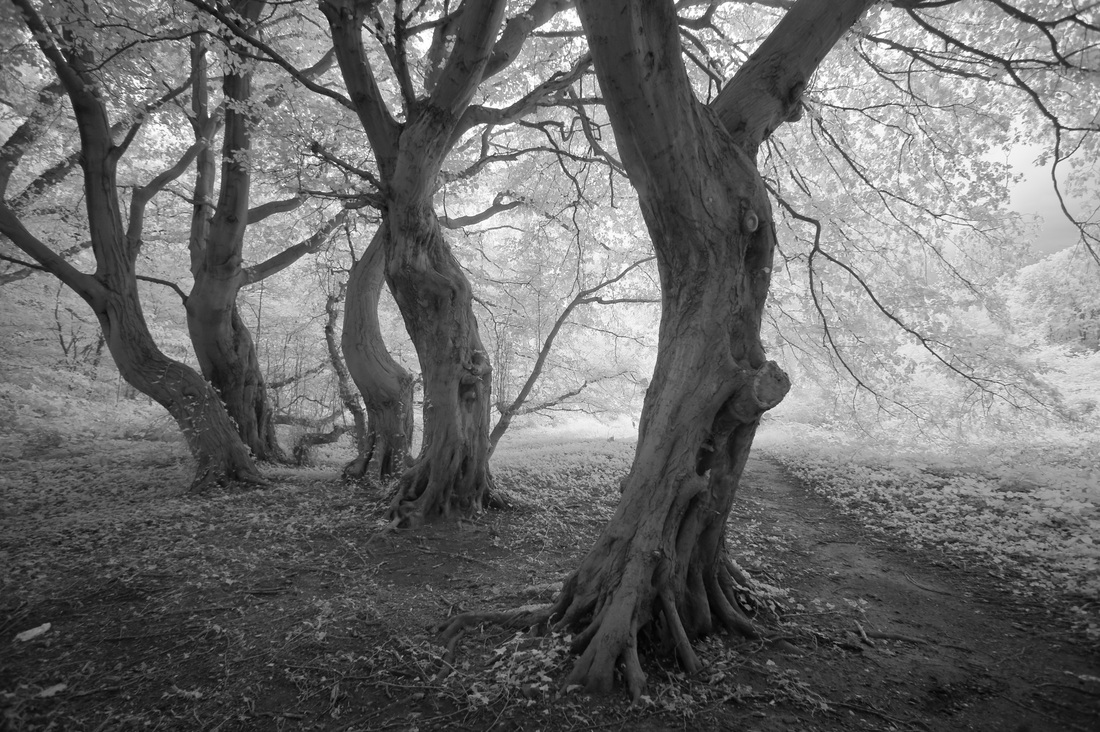 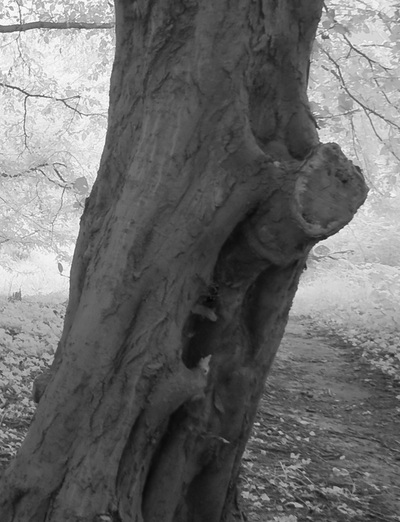 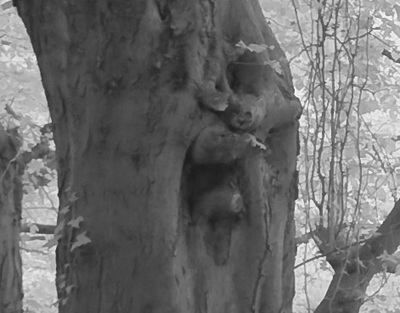 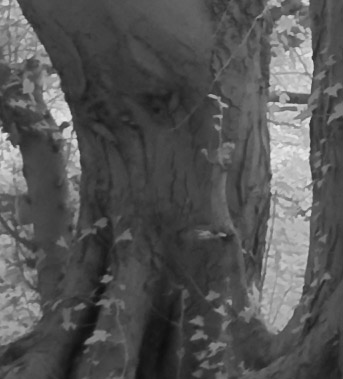 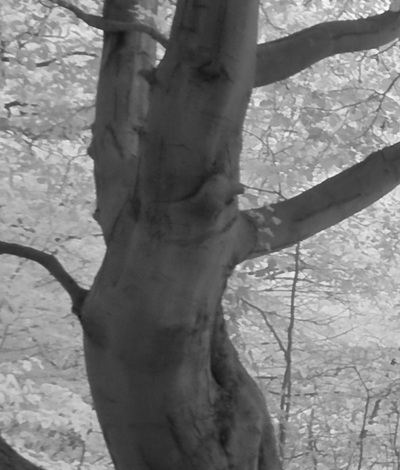 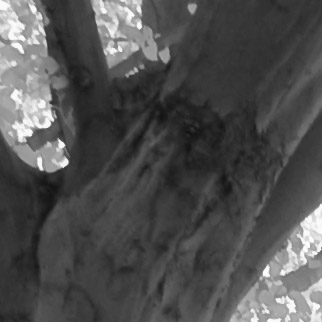 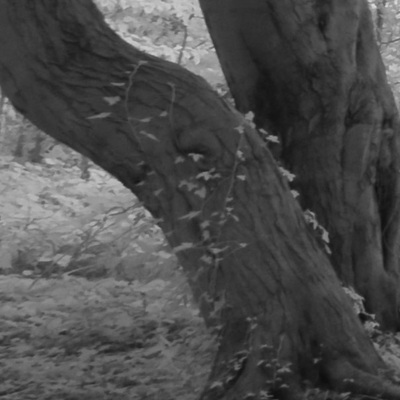 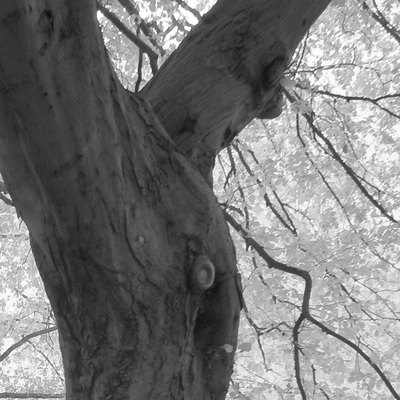 Pareidolia are erratic shapes like clouds in which one can recognise forms like a face. Every one has experienced those phenomena and the pattern recognition part of our brain is responsible, being focussed at facial recognition.

But what about Pareidolia only to be seen in infrared and not in the visible light spectrum? Now things become spooky...

While taking infra red photographs of erratic natural objects like old dead tree trunk remains or eroded cave dwellings, it struck me that, while studying the photos afterwards, monster like shapes and faces where recognisable on the pictures.
At first I payed no special attention to it as one can always see things in random shapes, if one wants to.
But I was alerted to the phenomena.
Than it struck me, while taking IR photographs, looking at the display on the spot, I could see strange monster faces in the infrared photo's while I could not see them in real life.
Taking a comparison photo with a normal camera proved the phenomena.

In a forest near Rimburg, singing trees and a dead tree remains stands as if it was a piece of art.
The monster faces and nude woman figure in it in infra red where not visible with the naked eye.
Trees in the Royal Botanic Garden Edinburgh show some intriguing samples as well.

I do have a possible explanation for the phenomena.
​Concerning the tree trunk picture:
The darkness of the monsters right eye is an actual hole in the trunk-bark, the left eye is a kind of greenish algae or so, appearing in the same dark grey density in IR, making two eyes while in the normal spectrum there is only one hole visible and the other eye is not distinguishable. So no facial recognition happens in the normal spectrum.

Still intriguing though...
It does proof that different spectra and filters can give whole different perceptions.
You only have to be willing and able to see it, and then the forest is indeed full of monstrously sculpted, haunted and animated faces and seductive creatures. Think of this next time you walk in the woods... 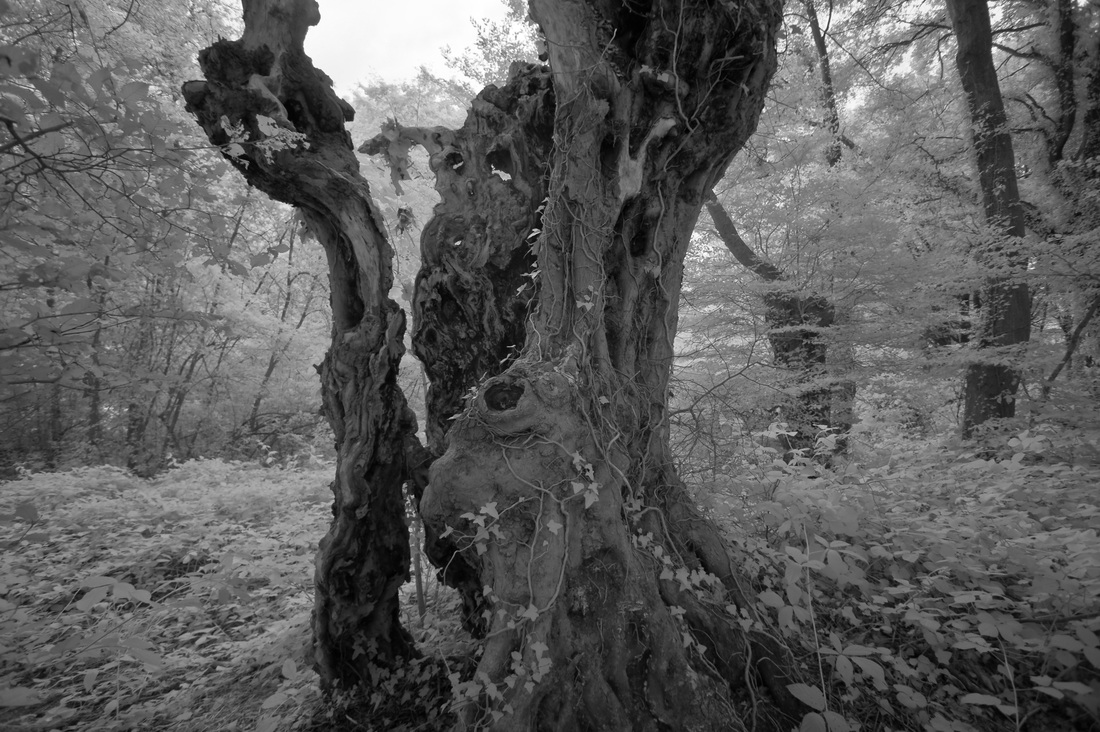 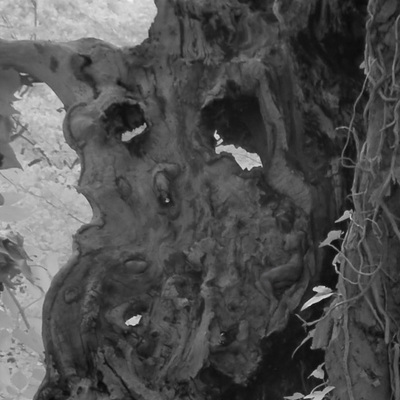 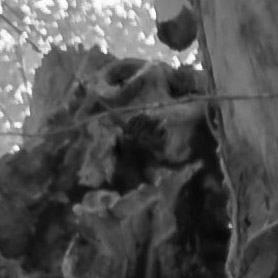 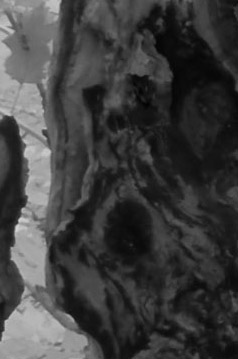 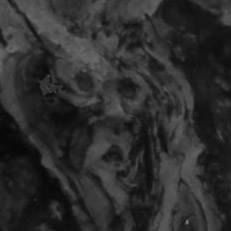 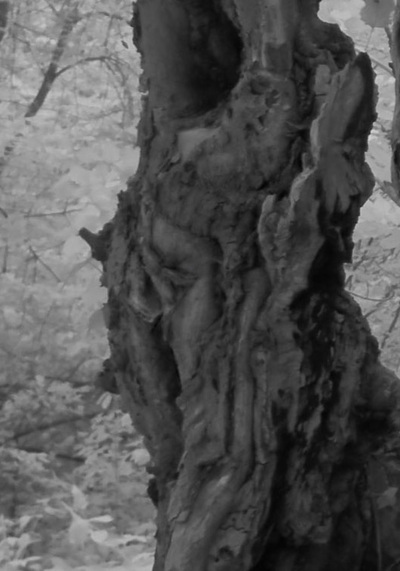 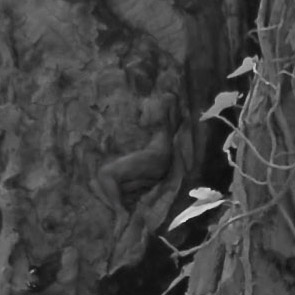 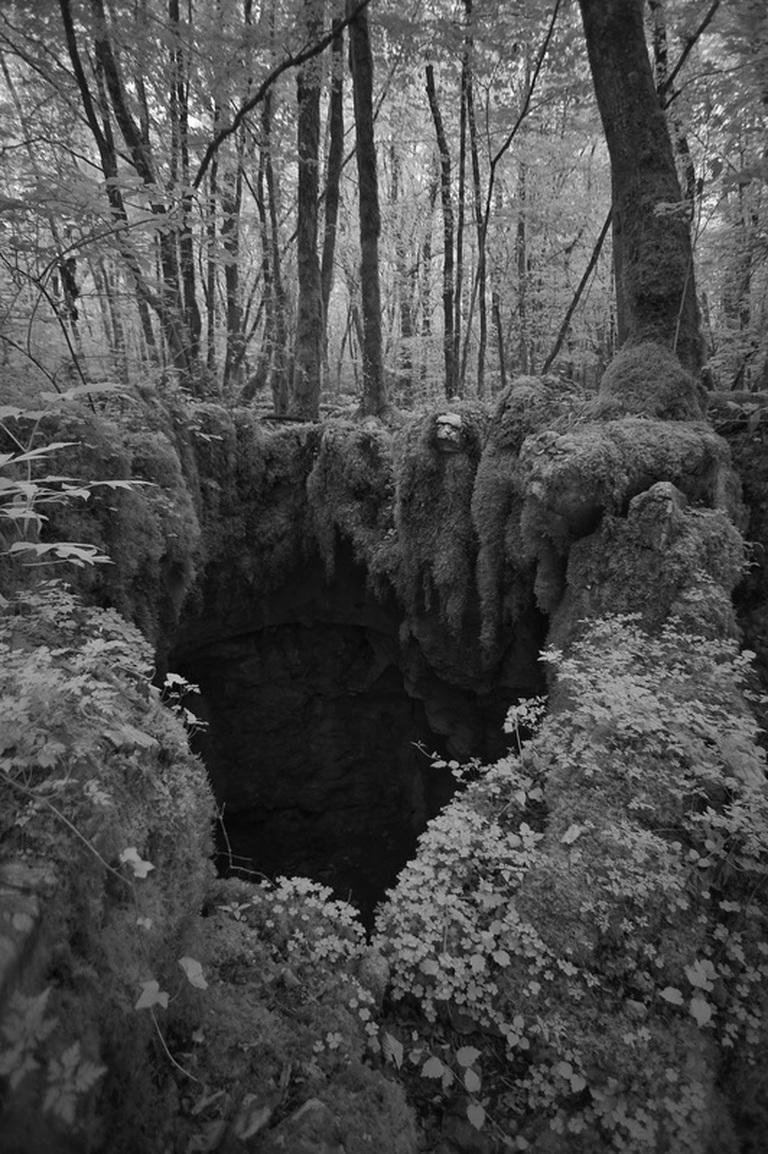 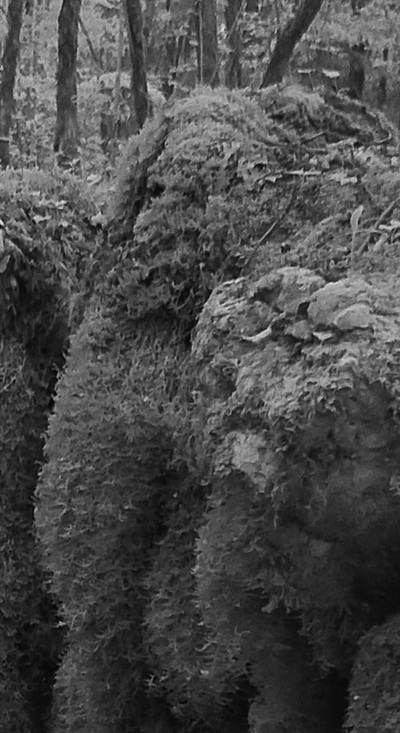 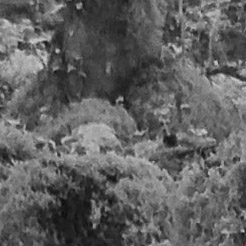 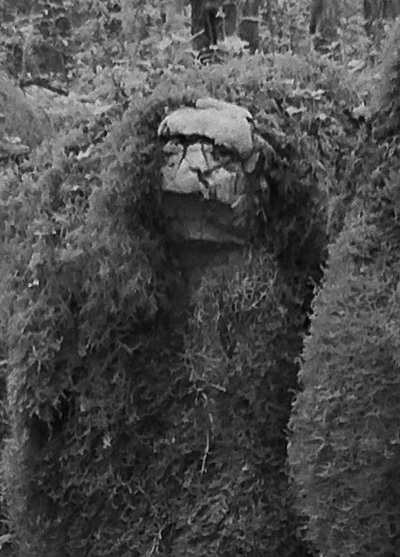 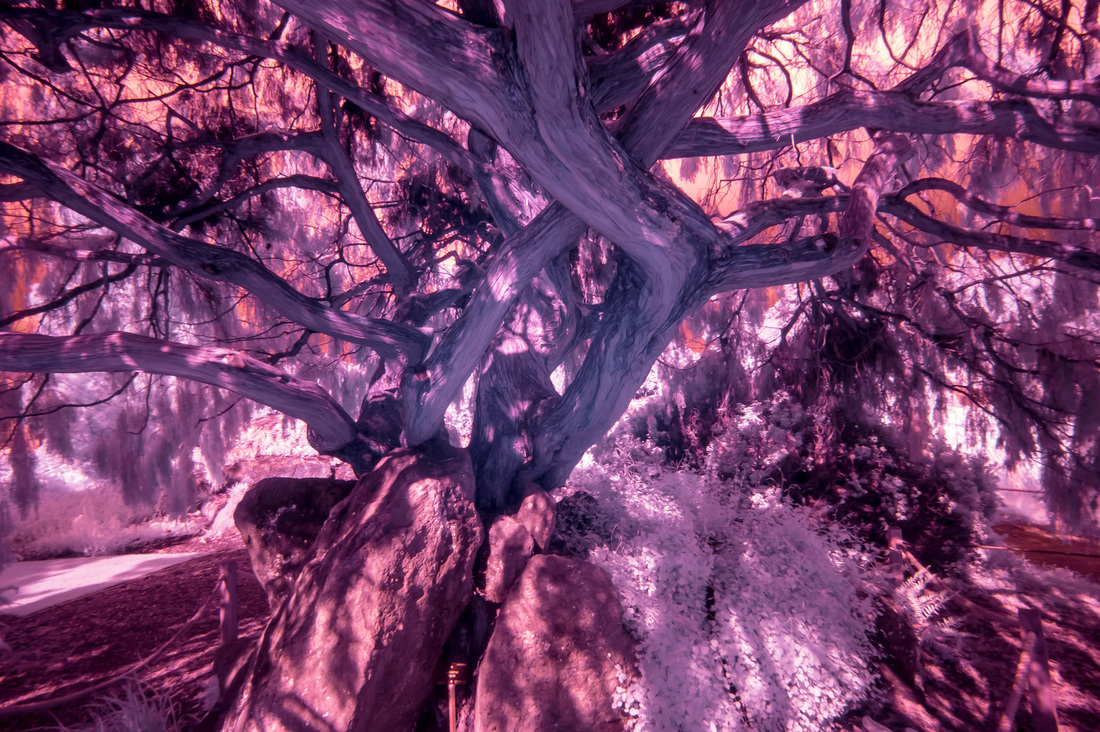 Coniferous tree in the Royal Botanic Garden Edinburgh in near infra red colour spectrum. One can see a somewhat troubelsome looking woman face in the centre, not visible in normal light. Discovered just only when reviewed for printing.
Sadly enough, the tree seemed to be sick and was cut down soon after the picture was taken. Was is a kind of mystical barky proclamation or a pareidolia moulded expression of grim grief? That's too far fetched, I suppose.
Anyhow, this picture was part of the Photosynthesis exhibition in the RBGE just after it was cut down. 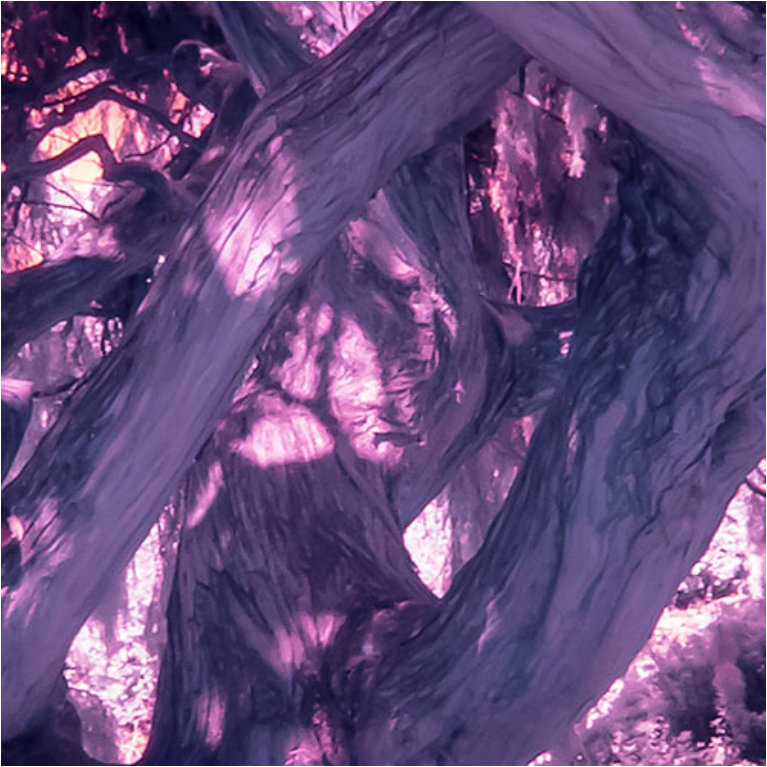 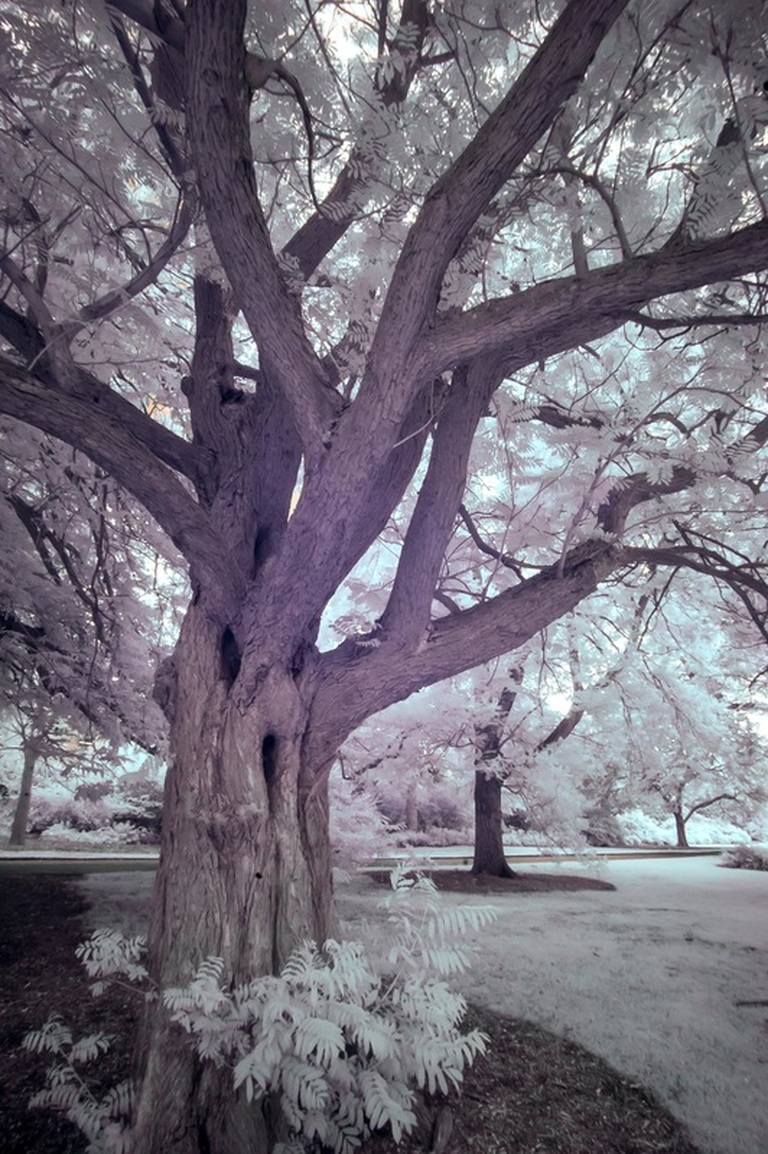 An other tree in infra red in the Royal Botanical Garden Edinburgh. 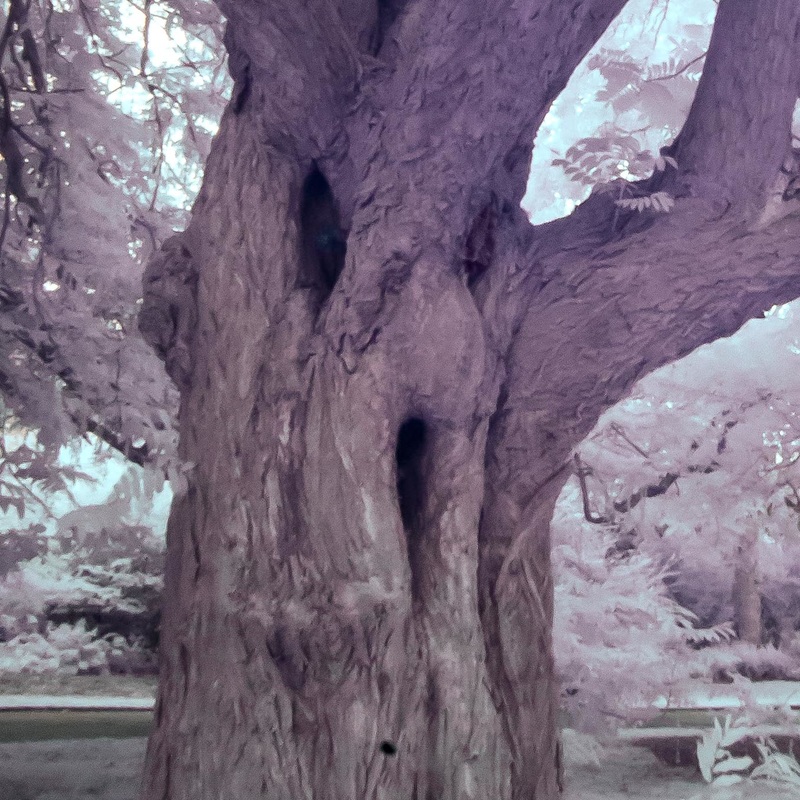